Martin del Amo explores the modern city as an ever-changing organism. Darkly funny and often surreal, the work distils the complexity of the urban experience into a multi-layered performative fabric made of dance, story telling and electronic sound design. 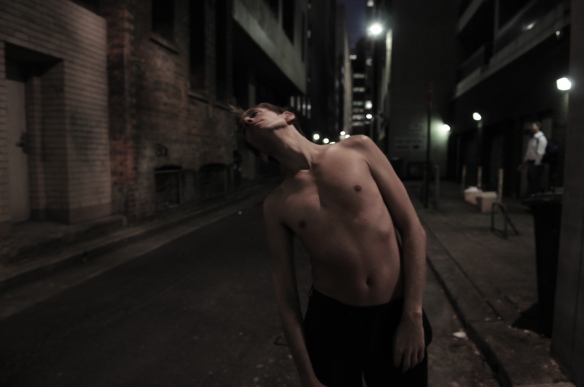 Inspired by a quote from US author Tom Wolfe who once called the modern city ‘a billion-footed beast’ – wild, bizarre and unpredictable – It’s a Jungle Out There puts the city at the heart of its exploration. It investigates it as an ever-changing organism, examining its anatomy, mapping it and relating the results to the body. The city is as much the choreographic source material for this work as it is its thematic target.

Physicalising the city’s all-pervasive disjointedness, It’s a Jungle Out There contrasts the rigidity of urban architecture and the formality of the street grid with the vibrancy and chaos that pulsates within it. Physical relentlessness caused by sensory over-stimulation alternates with personal stories of life in the city and moments of a gentle, poetic, even sensual nature.

The work is set to an experimental electronic sound score composed and played live by sound artist Gail Priest.